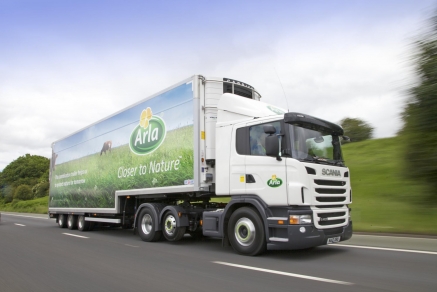 Posted at 09:24h in All, Trailer News by Fiona Simpson

The UK’s largest dairy company, Arla Foods, has driven forward a logistics first as its bespoke combination trailer takes to the road – with the help of Gray & Adams.

Breaking new ground and setting the standard for the dual transportation of raw milk and finished dairy products, Arla’s new hybrid trailer is half milk tanker, half refrigerated container.

Arla worked in partnership with Gray & Adams to produce the refrigerated trailer, while the milk tank was the work of Crossland Tankers.

Arla has ambitious growth plans, as its recent merger with Milk Link demonstrates, and it is inevitable that an increased customer base will result in more miles travelled. Therefore the need to collect raw milk and deliver finished products as efficiently as possible is at the heart of the company’s logistics strategy.

As Paul Lloyd, vice president of logistics at Arla, explains: “Arla’s logistics network is one of the largest in the UK, responsible for over 4,000 daily deliveries to stores and regional distribution centres nationwide.

“The new trailer is just one of many solutions we are delivering to ensure our carbon output and costs are as low as possible.”

In line with the company’s Closer to Nature ambitions, which targets a reduction in CO2 emissions by 34 per cent by 2020, the one-of-kind trailer will cut the number of road miles travelled by the company as it enables the collection of milk from farms as well as the delivery of both cages of milk and pallets of other dairy products.

“There were occasions when we were sending out a vehicle full of finished product then later sending out an empty milk tanker to collect milk,” explained Gordon Irvine, Arla’s group fleet director. “They could both travel the same route, but carry a load in the opposite direction. We aren’t the only company faced with this dilemma but we are the first to deliver a solution and put one of the country’s most innovative trailers on the road.”

The exterior view of the trailer is very similar to a standard double deck trailer but standing at 4.4 metres, it is 30cm taller than a standard refrigerated trailer. It is 12.2m long by 2.6m wide and has low profile running gear with a lowered step-frame section on the bottom deck to accommodate the milk tank.

Built to operate at the maximum weight allowed in the UK, 44 tonnes, the milk tank can hold approximately 19,000 litres and the trailer can accommodate 85 milk cages or 22 pallets.

Both Gray & Adams and Crossland Tankers are long-established suppliers to Arla Foods, said Gordon: “We were keen during the development phase to maintain confidentiality and I knew that not only would they deliver a quality product, but we could also trust them to work with us in the strictest confidence.”

Gray & Adams’ managing director, Lewis Gray, added: “It has been a privilege to work on such an exciting and innovative project. Arla Foods runs an exceptionally professional temperature-controlled distribution operation, and this ground-breaking trailer demonstrates once again the determination of the company to seize every opportunity to maximise efficiency.”

Crossland Tankers, managing director, Sean McKeown, commented: “We are delighted to have been involved in developing this innovative product which not only helps the environment but improves operating efficiency and reduces running costs. Arla Foods already operate a modern fleet of tankers specifically designed for farm collection but this combination trailer offers a new dimension to its transport operations with the ability to back load milk collection vehicles with finished product.”

Two years in the making, it is now being trialed out of Arla’s transport hub in Stourton, Leeds using a new lightweight Scania tractor.

“We apply a detailed three-stage implementation plan to validate its performance,” explained Gordon.

“The individual farms collected by the trailer will be carefully selected as the trailer is significantly larger than a normal farm collection tanker. It has been a tremendous project to work on, especially in the knowledge that we were breaking new ground.”