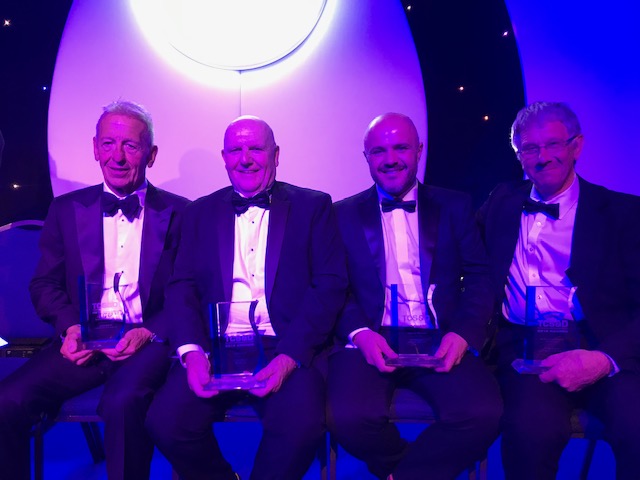 27 Jun Four in a row: Back to back TCS&D award wins for Gray & Adams

Posted at 08:37h in Industry News, News by Fiona Simpson

Gray & Adams’ position as the UK’s leading supplier of temperature-controlled semi-trailers and rigid vehicle bodywork has been proven for the fourth year running.

On Tuesday evening (25 June 2019) at the East of England Arena in Peterborough, Gray & Adams won the Innovation Award for the second year running and Refrigerated Trailer of the Year Award for the fourth year in a row at the 2019 Temperature Controlled Storage and Distribution (TCS&D) Awards.

This year Gray & Adams have won two industry awards, highlighting their on-going commitment to continuous improvement and engineering excellence. Building on last year’s success, the Innovation Award was won for their work on ‘The Pod’ with NewCold Logistics, who also took home the Lifetime Achievement Award for Tom Cassells. Also joining the celebrations, Castell Howell won Livery of the Year and Martin Jones accepted the award with a nod to Gray & Adams’ support in delivering their livery.

As a business, Gray & Adams has enjoyed many other occasions to celebrate in recent years, having reached their 60th anniversary, been included on The Sunday Times Top Track 250 League Table in 2017 and 2018 and having reached a turnover of £150 million in 2017.

The TCS&D Awards recognises companies and individuals who have made a difference in the temperature controlled storage and distribution industry, and Gray & Adams’ continued nomination and success at this event has recognised its achievements in providing best-in-class products and service that customers can trust.

“Gray & Adams has always had a strong business ethos built around people, quality and innovation. Winning these awards is testament to the talent and dedication of our staff; particularly the sales team and design engineers who work closely with our customers to fully understand and deliver their requirements. Our team works tirelessly to provide engineering excellence, industry leading customer service and aftersales care that is second to none. This commitment to innovation and continuous improvement has facilitated our success and growth over the last 60 years”.