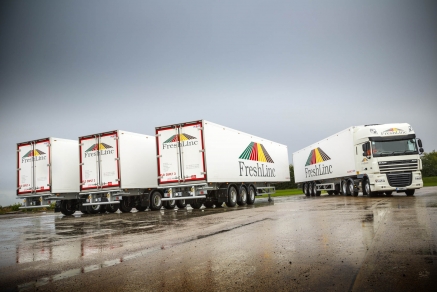 Refrigerated distribution specialist FreshLinc is cutting its fuel costs and reducing its carbon emissions after joining a Government-backed trial of longer semi-trailers.

Gray & Adams has just supplied the Lincolnshire-based operator with a clutch of insulated 14.6m trailers which are fitted with Carrier Vector dual-temperature refrigeration units and BPW self-steer axles that allow them to meet turning circle requirements.

The new trailers can each carry 28 pallets, two more than FreshLinc’s standard, 13.6m units. And as Group Fleet Engineer Andy Marchant confirmed: “That allows us to reduce the number of miles our vehicles need to cover, thereby saving fuel and improving our environmental profile.”

The fast-growing company’s latest Gray & Adams trailers are working with new 6×2 DAF XF105 Super Space tractor units, another 63 of which will be joining the fleet in December.

FreshLinc sends trucks daily between the UK and Europe, particularly the Netherlands and as far as southern Spain. But its 14.6m trailers have been assigned to an intensive trunking operation between Spalding and Scotland.

“It’s a gruelling application,” said Mr Marchant. “The rigs are fully-freighted and double-shifted, but I’ve every confidence that our new Gray & Adams trailers are up to the job.

Earlier this year the Department for Transport gave the go ahead for operators to begin trialling a limited number of longer semi-trailers – the Government wants to see how these might help to increase efficiency and cut the number of vehicles on UK roads.

“At the time we placed our order Gray & Adams had already built a large number of these longer trailers for several of the major supermarkets,” Mr Marchant recalled. “This, coupled with my own experience of its product quality and back-up over the last 15 years, meant we felt entirely comfortable in awarding it the contract to supply our own, extended-length trailers.”

He continued: “Gray & Adams produces great British trailers which are built to last. More than just strong and durable, though, they look good too, and are ideally suited to our operation – in short, they do everything we need them to do.

“Unlike some other trailer manufacturers, Gray & Adams is very good when it comes to building bespoke equipment, while I also sit down regularly with its Sales Manager Clive Horn to discuss adapting existing designs to meet our changing requirements.

“Gray & Adams’ back-up is first-class as well, particularly its warranty terms, which are second-to-none and reflect the company’s confidence in its own build quality.”