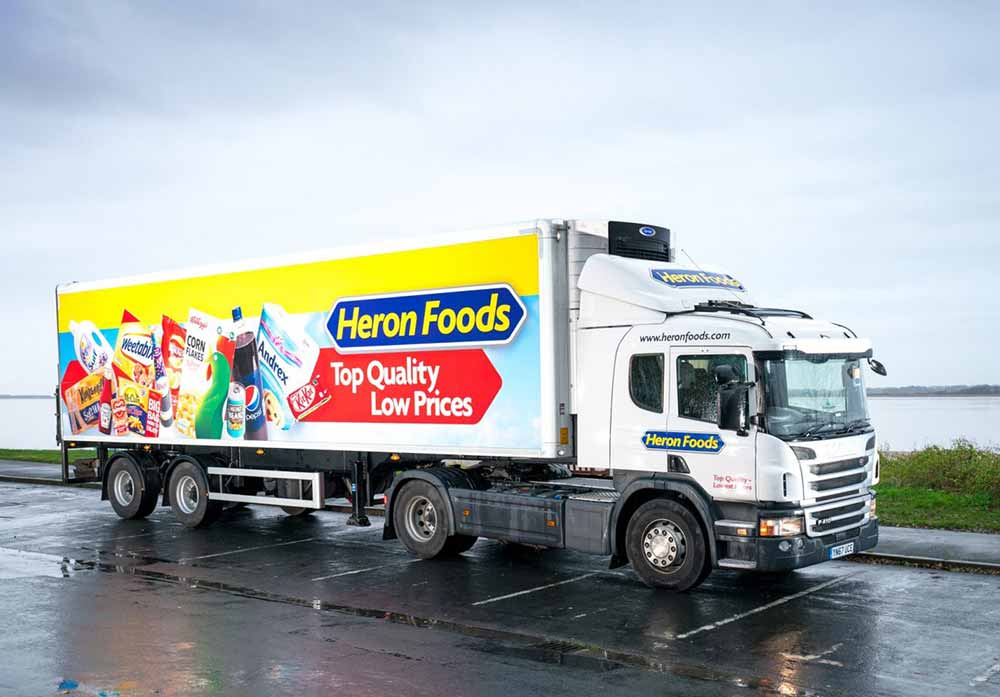 Posted at 16:03h in All by Fiona Simpson

Fast-growing retailer Heron Foods turned to the UK’s leading manufacturer of temperature-controlled road transport equipment to help it meet the operational challenge posed by the changing profile of its business.

Gray & Adams – a company that prides itself on its bespoke design and build capability – has added a second, moving bulkhead door to the specification of Heron Foods’ latest batch of semi-trailers. At a stroke, this cost-effective measure has given the operator the extra flexibility it needs to deliver higher volumes of frozen product.

Heron Foods opened its first store in Hull in 1979. The company’s headquarters are still in the city, but it now serves customers with “top quality products at the lowest possible prices” from 280 stores throughout the North of England and the Midlands.

Reflecting Heron Foods’ strong growth trajectory, the latest 20 semi-trailers represent extensions to its fleet. Once the last has been delivered Heron Foods will be running approximately 90 trailers – every one is an insulated, multi-temperature Gray & Adams box, and the subject of a contract hire agreement with independent, Hull-based specialist Grayrentals.

Heron Foods delivers round-the-clock to its network of stores. Many of these are situated in busy town centres, so while half of its new trailers are built to the standard, 13.6-metre length, the other half are 11.2-metre urban versions with the command steer axles that offer enhanced manoeuvrability for accessing tight locations.

As with all of Heron Foods’ trailers, the interiors have two longitudinal lanes configured in an approximate one-third/two-thirds width split. A host Carrier Vector 1950 MT refrigeration unit provides temperature control to the wide lane, while two MVS700 evaporators cool the narrow lane. The new trailers are also fitted with 1,500 kg Dhollandia tail-lifts – the 13.6-metre versions are fitted with retractable lifts but due to space constraints the urban variants have column lifts.

Previously, Heron Foods has carried only chilled product in the wide lane of each trailer; the narrow lane, which had a moving bulkhead door, was for frozen product. However, increased customer demand for frozen foods has prompted the addition of a moving bulkhead door in the wider lane. This affords Heron Foods the opportunity to utilise the wider lane’s higher capacity for frozen product, and switch the chilled to the narrow lane.

Roof-mounted and easily deployed or stowed, the moving bulkhead door offers excellent insulation properties, so that temperature integrity between compartments is maintained.

Heron Foods’ Head of Logistics Karl Dawson explains: “As the profile of the stock that we’re selling in our shops changes, we might, for example, find ourselves in a situation where we want to fit 20 cages of frozen in a lane that will only hold 15. Rather than leave them off, we can now flip the lanes, so we’re using what was the frozen lane to carry chilled and ambient product, and vice versa.

“We discussed various options with Gray & Adams but settled on this low-cost solution, which is simple but highly effective. The increased flexibility it offers is already proving invaluable. In fact, it’s working so well in enabling us to maximise productivity and efficiency, that we may retrofit additional moving bulkhead doors to a number of other trailers on the fleet, too.”

Heron Foods is a highly space-sensitive business. Given their locations, room for storage is at a premium at many of its stores, so the retailer has developed its own roll cages, which are slightly smaller than the industry standard. These cages have two sides rather than the usual three, and these sides detach from their bases. The bases can then be stacked, and sides carried in other cages, all with the aim of minimising their footprint.

Heron Foods acquired its first Gray & Adams trailers in 2013 and has not looked back since. Karl Dawson continues: “Gray & Adams’ build quality is second-to none, while its trailers are designed specifically to accommodate the unique dimensions of our roll cages.

“While others are happy to churn out hundreds of standard trailers every week, we greatly value Gray & Adams’ engineering expertise, and commitment to working with us in developing bespoke products that meet the needs of our business perfectly.”

Together with colleagues and representatives of Grayrentals, Mr Dawson has toured Gray & Adams’ production facility in Fraserburgh, where Heron Foods’ trailers are built. “I also speak regularly to Gray & Adams Sales Manager Stewart Massie, and we’ve hosted him on several visits to Hull,” adds Mr Dawson. “The time and effort the manufacturer’s team have put into understanding our operation, and the way we work, underpins the success of our relationship.”