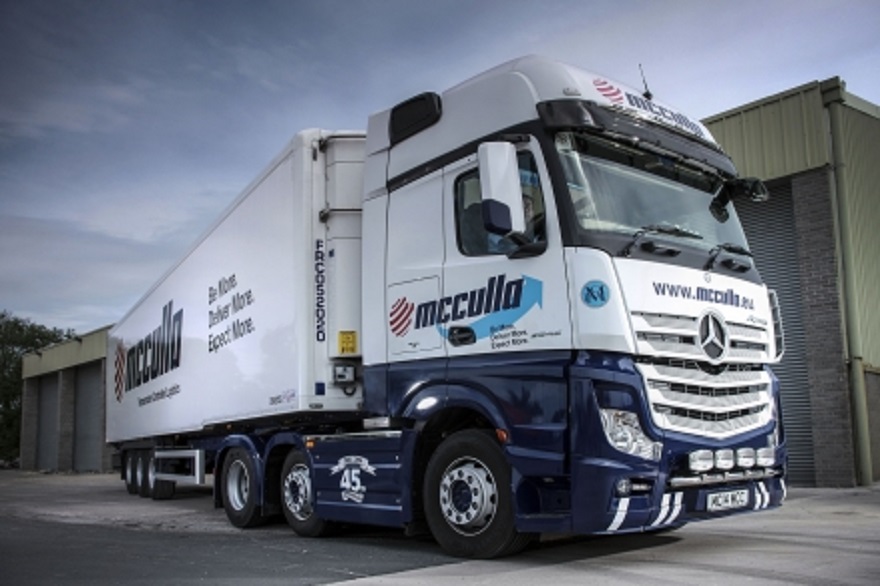 Specified for optimum fuel efficiency, the new 13.6m trailer is now six weeks into a three-month trial and already producing impressive mpg savings of up to five per cent.

Gray & Adams unveiled its new cappings at the Commercial Vehicle Show 2014 in Birmingham. They are more aerodynamically profiled than its previous, standard one-piece cappings, a feature that helps to reduce diesel consumption as well as giving the trailer or rigid vehicle a more modern, streamlined appearance. Impact-resistant and bonded to prevent moisture ingress, the cappings are also designed to accommodate the high-visibility tape that is now a statutory requirement.

McCulla (Ireland) operates from bases in Lisburn and Dublin, and is a long-standing customer of the UK’s leading manufacturer of temperature-controlled semi-trailers and bodywork. It purchased Ireland’s very first Gray & Adams trailer some 35 years ago, and today the same supplier accounts for approximately 80 per cent of its 125 semi-trailers, as well having built the bodies for a high proportion of its rigid vehicles.

The latest addition to that fleet is equipped with ThermoKing’s SLX-e Spectrum multi-temperature refrigeration unit and advanced TouchPrint temperature recording system. In another ‘first’ for McCulla, it has a roof-mounted vortex generator which manages the airflow over the back of the trailer while, to further boost economy, it is also shod with low rolling resistance Generation 3 tyres from Continental.

McCulla is a serial award-winner and current holder of Temperature-Controlled Storage & Distribution magazine’s ‘UK Refrigerated Transporter of the Year’ title, as well as its ‘Environmental and Sustainability’ award.  A member of the Road Haulage Association, it is also a three-time winner of Export & Freight’s Chilled Haulier of the Year’ trophy and was ‘Transport Company of the Year’ at the 2012 Irish Logistics and Transport Awards.

Pulled by one of McCulla’s fuel-efficient Mercedes-Benz New Actros tractor units, the new trailer is on long-distance, predominantly motorway work, which takes it to the UK mainland and down to Paris. It has a moving internal bulkhead and two levels of recessed load lock, and is also fitted with Gray & Adams’ sliding suzie rail – the gantry coupling device slides to the very edge of the body, eliminating the need for the driver to climb between the tractor unit and trailer to connect and disconnect the air and electrical suzie lines, so making the process quicker, easier and – most importantly – safer.

“We do everything possible to maximise fuel efficiency and thereby minimise the impact of our operations on the environment,” confirms McCulla (Ireland) Operations Director Brian Beattie. “First impressions of the new trailer are excellent – in a back-to-back comparison with conventional trailers on the same work it appears to be cutting diesel consumption by as much as five per cent.

“It also looks slicker, more modern and eye-catching, which can only be a good thing given that our vehicles also serve as mobile billboards for the business. On the basis of the results we’ve seen to date, and the very significant savings we stand to make, it would be our intention to specify all future trailers in this way.”

McCulla’s new trailer has also won the ‘thumbs up’ from long-serving Mervyn Cardwell, the reigning Export & Freight Driver of the Year, to whom it has been assigned. It was built at the Gray & Adams (Ireland) production facility in Newtownabbey. “The fact that Gray & Adams has a manufacturing and repair operation here in Northern Ireland gives it a big advantage over its competitors when it comes to after sales support,” continues Mr Beattie.

“We’re not a company that undertakes routine ‘A to B’ haulage. Rather, we have some very specific requirements in terms, for example, of load configurations and the heights at which we need restraints. With Gray & Adams, unlike other manufacturers, we can sit down and work out a bespoke solution that’s designed perfectly to meet our needs.

“What’s more, our Gray & Adams equipment has proved over the years to be outstanding reliable and durable, and to offer the most competitive ‘whole life’ running costs.”

Founded in 1969 by David McCulla, the company is now owned and run jointly by his son Ashley and daughter Carol Thompson. Its fleet of Gray & Adams semi-trailers includes a number of twin-deck units which are used to distribute pharmaceuticals, 10.8m versions with steering rear axles for urban deliveries, and meat-railers.