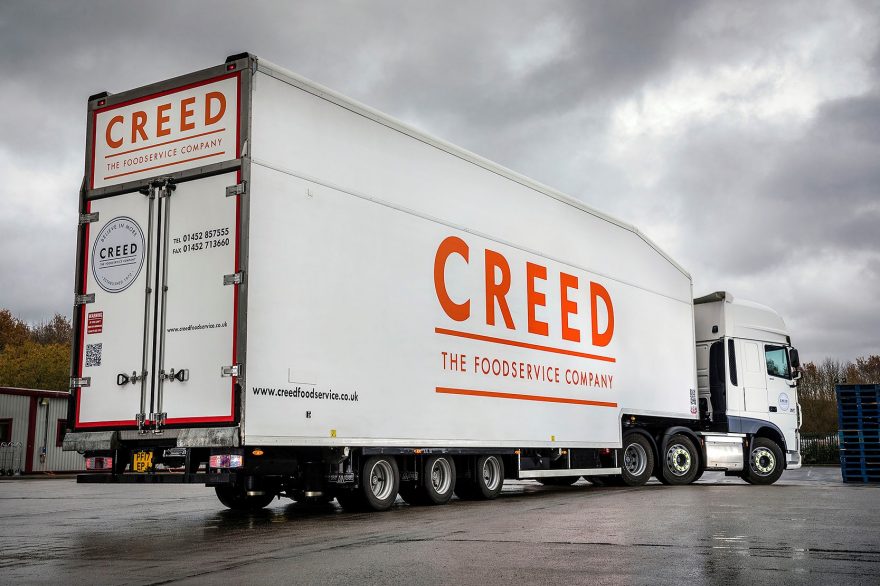 Posted at 09:38h in Case Study, News by Fiona Simpson

Independent wholesaler Creed Foodservice is slashing CO2 emissions by more than 300 tonnes per year after turning to Gray & Adams for its first twin-deck semi-trailer.

Family-owned Creed, which is currently celebrating its 45th anniversary, enjoys a well-deserved reputation for innovation within its product range. As its new acquisition demonstrates, the company is just as open to fresh ideas when it comes to its distribution operation.

The order represents another significant step forward in its relatively new relationship with Gray & Adams. The two only began doing business together in 2015. Since then the UK’s leading manufacturer of temperature-controlled transport equipment has supplied Creed with a clutch of single-deck, 13.6m semi-trailers, as well as insulated and refrigerated bodywork for a number of 18-tonne rigid vehicles.

Operations Controller Richard Frost confirms: “We carried out some extensive research before placing our latest order, and this confirmed that Gray & Adams is by far the market-leader when it comes to double-deck semi-trailers.”

Creed’s new lifting-deck trailer features a sloping roof and Gray & Adams’ latest, aerodynamically profiled panel cappings, both of which contribute to fuel efficiency. It is equipped with a Carrier Vector 1950 multi-temperature refrigeration system.

Thanks to a series of clever design features, the trailer offers a market-leading 44-pallet carrying capacity. However, Creed is using the latest addition to its growing fleet to transport product in cages – it can accommodate 36 on each deck, as well as a further 15 in the neck.

Creed Foodservice operates from headquarters in Staverton, near Cheltenham. A founding member of the Country Range Group of independent wholesalers, it supplies a carefully selected range of more than 6,000 lines across multi-temperature categories to chefs and caterers nationwide.

The new lifting-deck trailer is based at the company’s purpose-built main distribution hub in Ilkeston, Derbyshire, and is being used to transport chilled and ambient ‘sub-supply’ product to a centre in High Wycombe, Buckinghamshire, which it opened less than a year ago.

“However, the increased carrying capacity of the lifting-deck trailer means we can now do the same job with a single truck. It’s a round trip of 285 miles, which means we’ll be covering 74,100 fewer road miles each year.

“This new trailer has therefore enabled us significantly to improve our environmental profile through the very substantial reductions we’re achieving in CO2 and other emissions.”

Mr Frost continues: “We have been very impressed not only with the quality and reliability of Gray & Adams’ equipment, but also with its customer-focused service. The manufacturer provided us initially with a lifting-deck trailer for trial, so we could make sure it was going to suit our operation. It has also delivered a programme of training for our operational personnel which was exceptionally well received.”