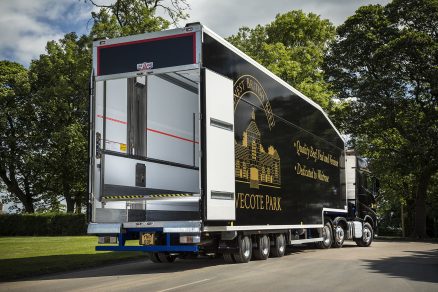 Posted at 15:15h in All, Industry News, Trailer News by Fiona Simpson

This compares to the 26 pallets carried by a 13.6-metre single-deck trailer, and is four more than achieved by a standard double-decker – the 10 per cent increase is down to a series of cleverly-engineered measures which ensure that practical use is made of every inch of space on the two decks.

A specialist provider of logistics services to the food industry, Dennis Distribution operates from headquarters in Malton, North Yorkshire, and other sites in South and East Yorkshire.

The new Volvo FH tractor which pulls the lifting-deck trailer is effectively doing a job for which two units were previously required, thereby enabling family-owned Dennis to save fuel and enhance its emissions profile.

Dovecote Park, meanwhile, prides itself on maintaining the highest standards of animal welfare and husbandry. It contributed to the recent achievement of Waitrose, its primary customer, in securing a Tier 1 ranking from the Business Benchmark in Farm Animal Welfare, a global audit of food companies’ practices and reporting.

The trailer is now being used to transport the finest beef, veal and venison on a daily basis from Dovecote Park’s Stapleton Estate in Pontefract, West Yorkshire, to the Waitrose Regional Distribution Centre in Bracknell, Berkshire.

Dennis Distribution runs 32 tractor units and 50 semi-trailers, of which 20 are by Gray & Adams, making it the best-represented manufacturer on the fleet. The latest addition to the line-up is certainly turning heads thanks to its eye-catching graphics, which were applied by AST Signs, of Penrith.

Explaining the decision to commission its first double-deck trailer, General Manager Andrew Revely said: “We identified a daily route that offered an opportunity to achieve some significant efficiency gains by making full use of the lifting-deck trailer’s additional carrying capacity.

“This increased productivity and the resulting reduction in road miles is benefiting the environment, through the reduction in emissions. By maximising utilisation of our tractor unit fleet it has also freed up a vehicle for other work.”

Mr Revely said Dennis Distribution’s adoption of the lifting-deck trailer had been enthusiastically supported by Dovecote Park, which had modified one of its loading bays in order to accommodate the new equipment.

Dennis Distribution can trace its roots back to 1890, and the establishment of general haulier J D Dennis. However, the business in its current form was founded in 1958 by Tom and Ann Dennis, who purchased their first refrigerated trailer in 1970.

Dennis Distribution enjoys an enviable reputation for customer service and reliability. Gray & Adams has been a trusted supplier for many years – as well as floor loading trailers the operator also runs a number of its meat railers, which are designed to transport hanging cuts on hooks suspended from the roof.

Mr Revely continued: “The Gray & Adams lifting-deck is widely recognised as the best on the market, which explains why there are now so many on the road. This, together with our own previous experience, gave us the confidence to go ahead.

“We couldn’t be happier with the new trailer, which is perfectly specified for our operation and looks fantastic in our customer’s striking livery.”