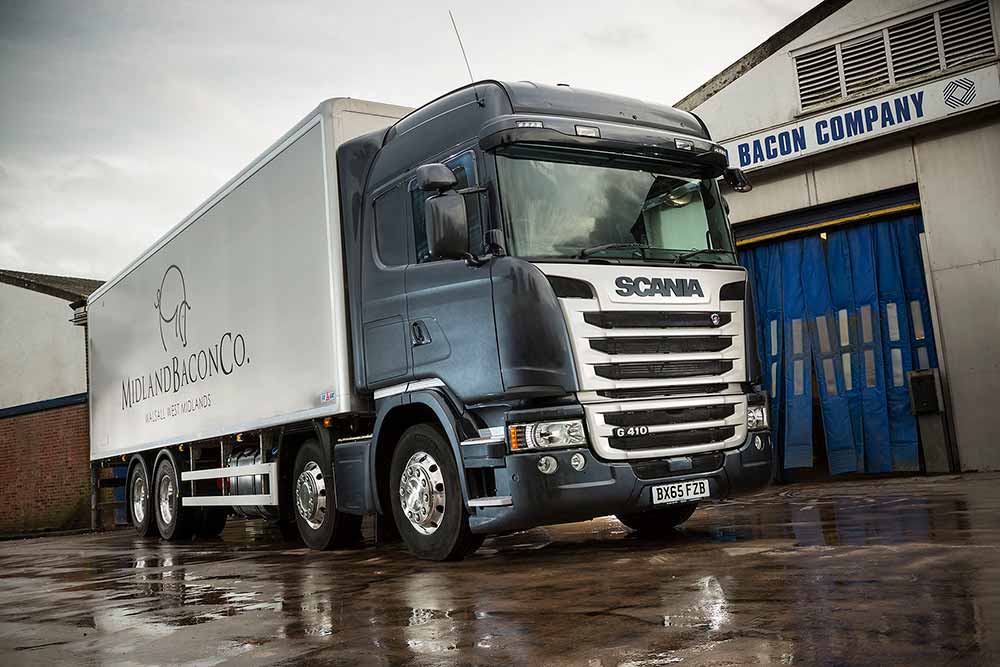 The first truck to bear the Midland Bacon Co name is fitted with an aerodynamic Gray & Adams temperature-controlled body mounted on a 32-tonne Scania chassis.

The West Midlands-based processor took the highly unusual step of specifying an eight-wheeled refrigerated rigid to ensure that it does not fall foul of axle loading regulations.

Managing Director Chris Cox explains: “The DVSA (Driver and Vehicle Standards Agency) is becoming very hot on overloading issues and it’s easy to get caught out on the front axle with a 26-tonner. As a responsible operator I’ll do whatever it takes to ensure that my vehicles meet all legal requirements and I see this concept as being a template for the future.”

The 8×2 truck’s slippery body is contributing to another valuable benefit in the form of impressive fuel efficiency: “The new vehicle is touching 14 mpg, which compares very favourably to the 10.5 mpg I get from my six-wheelers,” says Mr Cox.

Midland Bacon Co is one of a small handful of privately-owned suppliers that provide a complete bacon processing service which encompasses butchering, curing and then slicing. This allows it to minimise transit damage, so foodservice customers nationwide benefit from a highly consistent product.

The eye-catching 32-tonner has lined up alongside the other 11 vehicles which work from Midland Bacon Co’s headquarters in Walsall. As well as being the company’s biggest truck yet and the first with a livery – its other trucks are plain white – it is also the first with a Gray & Adams body.

The 9.0-metre insulated box was built and fitted at the manufacturer’s Doncaster production facility. Positioned very close to the back of the cab to reduce drag, it features an underslung Carrier Supra 950 u single-temperature refrigeration unit and Gray & Adams’ latest, aerodynamically profiled panel cappings – not only do these improve fuel efficiency, but they also give the vehicle a modern, streamlined appearance. The interior has a full chequerplate floor, stainless steel rear end and a PIR (passive infrared) lighting system.

The truck offers an 18-tonne payload and 18 pallet carrying capacity, compared to the 14-tonne payload with 16 pallet spaces that Midland Bacon Co’s 26-tonners can accommodate. “We run out of weight before we run out of space with the six-wheelers,” explains Mr Cox, who founded his company in 1995.

He continues: “We’ve been enjoying a period of steady growth so the time was right to try this new vehicle, and we’ve put a lot of effort into getting it right.

“I chose Gray & Adams because they’re the acknowledged market leader in terms of quality, reliability and durability. They’re also a home-grown company and I like, whenever possible, to buy British.

“Gray & Adams Doncaster Sales Director Andrew Brown has provided a first-rate service and while we still have a little fine tuning to do on the vehicle, the early indications are certainly very positive. I’m delighted with it.”