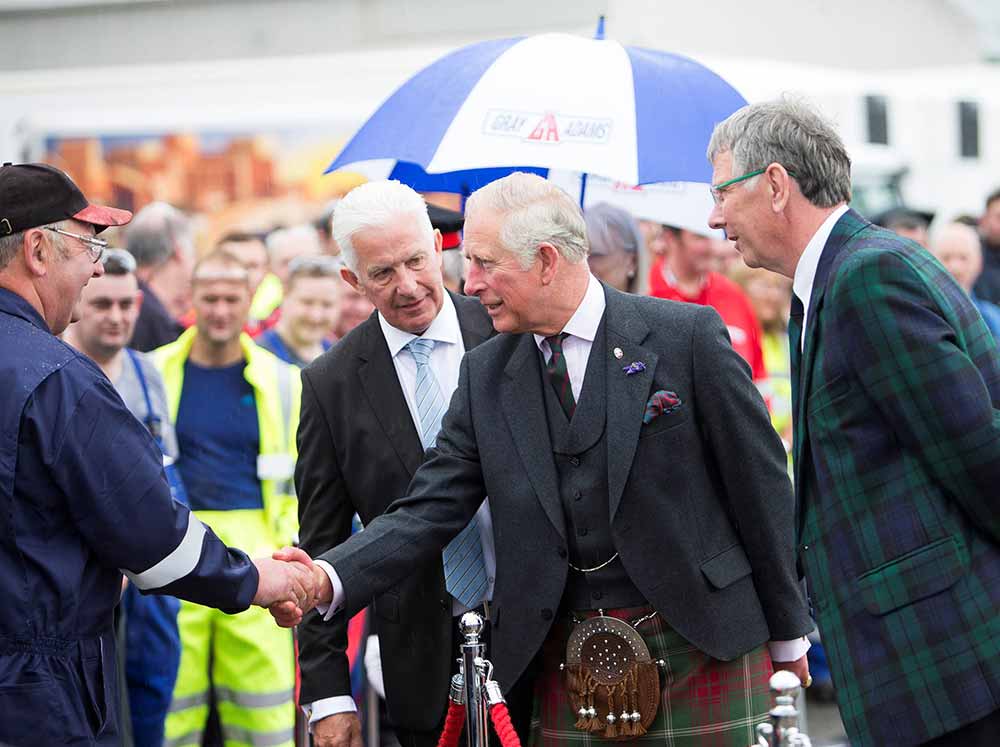 Posted at 09:41h in All by Fiona Simpson

The UK’s leading manufacturer of temperature-controlled transport equipment has launched its 60th anniversary celebrations by hosting a visit from HRH Prince Charles and announcing its intention to build the UK’s first, maximum-length, lifting-deck semi-trailer.

The Prince, who as heir to the throne uses the title of Duke of Rothesay when in Scotland, was conducted on a tour of Gray & Adams’ Fraserburgh headquarters by Joint Managing Directors Peter and James Gray. He chatted with staff from all levels of the business and viewed the production facilities in which the ground-breaking 15.65m trailer is to be built.

Commissioned by an established, high-profile customer, its precise specification has yet to be confirmed. However, it will feature four separate temperature zones and offer a capacity of 60 pallets, comfortably more than double the number that can be carried on a standard, 13.6m single-deck trailer.

Gray & Adams began life in 1957, when panel beater Jim Gray and motor mechanic Jim Adams set up a car and body repair business to serve the area in and around Fraserburgh.

Six decades on and still family-owned, it is now a £150-million turnover business employing more than 700 people in Scotland’s North-East and at other production facilities in Belfast, Doncaster and Dunfermline, as well as an after sales centre in Bedford.

Although Gray & Adams also builds dry freight trailers and bodies, including highly specialised vehicles for niche markets, it is for temperature-controlled equipment that the company is best-known. Its products enjoy an unrivalled reputation for quality and durability, and are chosen by many of the biggest names on UK roads, including all of the major supermarkets.

Innovation has also been a Gray & Adams hallmark since its earliest days, and the 15.65m lifting-deck project once again underlines its technological leadership. Having built some of the first insulated trailers for the transportation of perishable goods in the late 1950s, Gray & Adams went on to manufacture the industry’s first double-deck trailer in 1994, and its first lifting-deck version in 2000.

The company has also pioneered the development of longer, 14.6m and 15.65m semi-trailers, since the Department of Transport launched a major trial in 2012. It has built fixed double-deck variants at lengths in excess of 14m. But neither Gray & Adams, nor any of its competitors, has yet engineered a twin-deck version at the maximum permissible 15.65m length, let alone one with a lifting second deck for easier loading and unloading.

Fiercely proud of its ‘British built’ heritage, the company was honoured to mark the start of its 60th anniversary year by welcoming HRH Prince Charles for its first Royal visit. He was accompanied by James Ingleby, the Lord Lieutenant of Aberdeenshire, and welcomed by Jim Gray’s sons Peter and James.

The factory tour took in the various stages of the production process, with the Prince showing particular interest in the different types of insulated panel used by the manufacturer to build its trailers and bodies.

He spoke to staff who explained their roles, and also to several of those among the ranks of cheering colleagues who lined his route between the site’s buildings – not even a torrential downpour could dampen their enthusiasm.

The Gray & Adams team invited a number of leading customers, and they also had the opportunity to meet the Royal guest and see him unveil the plaque commemorating the biggest day in the company’s history.

Before returning to the helicopter in which he arrived, Prince Charles received a number of gifts as mementoes of his visit. Among them were scale models of tractor units and double-deck trailers bearing the names of his grandchildren Prince George and Princess Charlotte. These were presented by Stuart Philpot, aged 13, and his sister Grace, 10, founder Jim Gray’s own grandchildren by his daughter Marie Philpot, who is also a Gray & Adams Director.

Peter Gray commented: “This company has grown out of all recognition over the last 60 years. However, we remain a family-owned business with all that this implies in terms of our personal commitment to customer care, and to the training and development of our people. Indeed, we are proud of the many long-serving members of staff who have remained loyal to Gray & Adams throughout their entire careers.

“A lot of time and effort went into the planning of this visit, which was a huge success. The Prince was very interested in what we do, and demonstrated an impressive understanding of some of the engineering challenges that we have to overcome in tailoring equipment to meet the specific requirements of our customers.

“Our Royal guest was also very generous with his time, chatting with numerous members of the company team and leaving them with memories they will never forget. His visit was the perfect way in which to celebrate this important milestone in the history of our company.”

Getting the measure of Gray & Adams… Prince Charles was particularly interested to learn more from Joint Managing Directors Peter, left and James Gray, about the various types of insulated panel used in the production process

Laughing matter… The Royal guest shares a joke with Dariusz Krawiecki, a Manufacturing Operative in the Completion Department, during his tour of the Fraserburgh factory