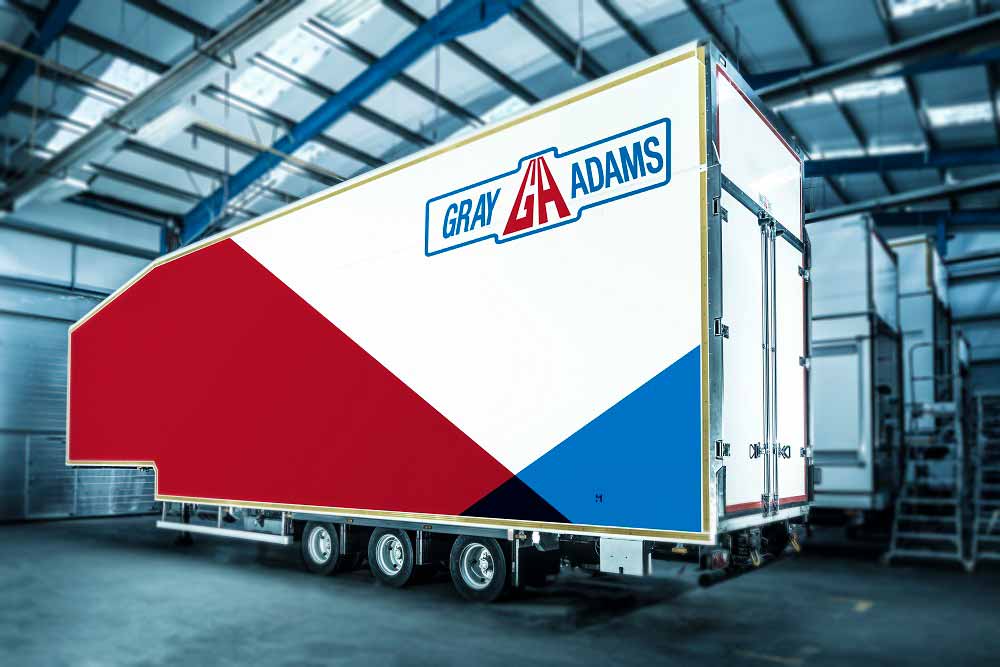 Posted at 09:47h in All by Fiona Simpson

This trailer will be finished in an eye-catching livery on both sides and at the rear, conveying the impression that the skin has been peeled back to reveal food produce in cages on both decks inside.

Gray & Adams enjoys a well-established reputation for innovation. Having built the first fixed twin-deck trailers in 1989, it then unveiled the hydraulically operated lifting-deck variant 11 years later. The 44-pallet version made its debut in 2010 – in line with the manufacturer’s commitment to product development, its design has been steadily refined since. Gray & Adams estimates there are now more than 3,000 lifting-deck trailers built at its headquarters in Fraserburgh in operation on UK roads.

Also appearing on the company’s stand will be an 11-metre urban trailer, built for a high-profile restaurant chain. This trailer will have one longitudinal internal partition creating two lanes, a Tridec command steer system for optimum manoeuvrability, a 1,500 kg Dhollandia column tail-lift, and a Carrier Vector 1950 dual-temperature fridge.

Completing its NEC line-up, Gray & Adams will be presenting an eco-friendly 26-tonne rigid, which is due to commence trials with the Co-op after the event. Based on a diesel-electric Scania hybrid chassis, the truck’s 8.8-metre body will have a curved front and low-noise, Gripster alloy floor. Other features include an underslung Carrier Supra 1150U multi-temperature fridge, a 1,500kg Ratcliff power closure column tail-lift, and a JR Industries electric shutter door.

Joint Managing Director Peter Gray confirms: “This is a significant year for Gray & Adams so we’re very much looking forward to returning to the CV Show, and meeting up once again with many established and prospective customers.

“We have been in business for 60 years but this company has not stood still for a minute. We never rest in our pursuit of the next advance that will give our customers a competitive advantage, while our commitment to bespoke design and unrivalled build quality ensures that not only are our products perfectly tailored to the job at hand, they can also be relied upon to last the pace.”

Gray & Adams was founded in 1957 by panel beater Jim Gray and motor mechanic Jim Adams, who teamed up to form a car body repair business. In the late 1950s and early ’60s they produced some of the first insulated trailers for the transportation of perishable goods – dry ice was employed to cool the load.

Though still family-owned, Gray & Adams has since grown out of all recognition. Winner of the OEM (Original Equipment Manufacturer) of the Year and Refrigerated Trailer of the Year trophies at the 2016 Temperature-Controlled Storage & Distribution Awards, it is now a £125-million turnover business employing more than 700 people at its base in Scotland’s North-East, other manufacturing facilities in Doncaster, Dunfermline and Newtownabbey, and a commercial vehicle repair facility in Bedford.