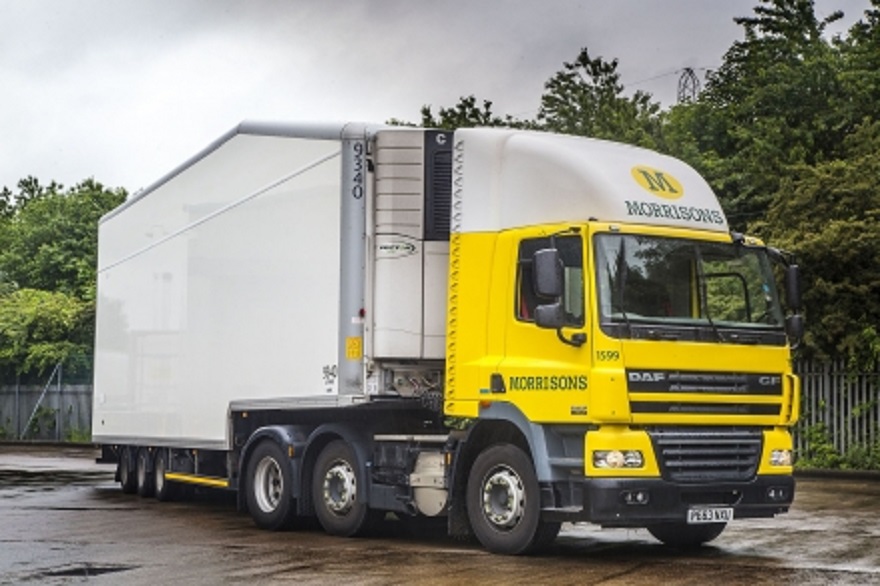 Morrisons offers its customers ‘More of what matters’ – and that’s exactly what it gets from Gray & Adams.

The supermarket has begun taking deliveries from Britain’s leading supplier to the temperature-controlled distribution industry, of a third batch of maximum-length semi-trailers. The last of these is scheduled to enter service next autumn, by which time Morrisons will be running well over 100 examples.

According to John Ward, Head of Engineering at Morrisons, the 15 per cent increase in productivity arising from the fact that the 15.65m trailer is capable of carrying 30 pallets – four more than a standard 13.6m single-decker – translates into “tremendous” cost savings.

Gray & Adams has built more long semi-trailers than any other manufacturer of insulated and temperature-controlled transport equipment. It also offers versions with command steer set-ups but, like their predecessors, Morrisons’ latest boxes are being fitted with 27-degree BPW self-tracking axles that allow them to meet turning circle requirements.

However, in a ‘first’ for the supermarket, Morrisons has opted this time for multi-temperature refrigeration – Carrier Vector 1950s with dual-discharge slim line evaporators. Previously, it has specified single-temperature systems with fans.

Mr Ward explains: “We’ve purchased these latest trailers for operation in the south of the country, where there is more traffic congestion and where, as a result, the loads are likely to be on the vehicles for longer periods. The switch to multi-temperature refrigeration allows us to guarantee the integrity of three separate regimes in the most demanding of circumstances.

“The self-steer axle works very well and helps to ensure that the long trailers are able to access a very high proportion of our 400 large stores nationwide.”

Morrisons is running its extended semi-trailers as part of a long-term trial launched in 2012 and backed by the Department for Transport. The Government wants to see how the additional length – 14.6m variants are also included – might help to increase efficiency and cut the number of vehicles on UK roads.

As far as John Ward is concerned, the case has already been made. “We’ve also just ordered another clutch of lifting deck 13.6m trailers from Gray & Adams,” he says. “That’s an excellent piece of equipment, and capable of carrying up to 40 pallets. But for obvious reasons, the lifting deck trailer comes at a significantly higher capital cost than a 15.65m single-decker. For the majority of our deliveries, once you’ve factored in all of the variables, the long trailer is definitely the best solution, and one that’s producing tremendous savings worth many thousands of pounds per week.”

Morrisons is unique among Britain’s supermarkets in that as well as being a leading retailer it is also the country’s second largest fresh food manufacturer, making more than half of the food it sells.

The company, which recently announced a major programme of price cuts averaging 17 per cent and spanning both own-label and popular branded lines, is able therefore to maximise efficiency by using its truck and trailer combinations to collect product from its various manufacturing facilities, as well as delivering to stores from its network of eight RDCs.

Mr Ward adds: “Whenever we’re ordering anything outside the norm, whether it be a lifting deck trailer – and we now have more than 100 of those too – a long trailer or, as in this case, our first multi-temperature units, we’ll always put our trust in Gray & Adams.

“It offers a bespoke design service and I have the utmost faith in its engineering capability, and in the quality and reliability of its equipment.  What’s more, if we have an issue, as you will from time to time with even the best suppliers, I know from experience that Gray & Adams can always be relied upon to stand by their product.”