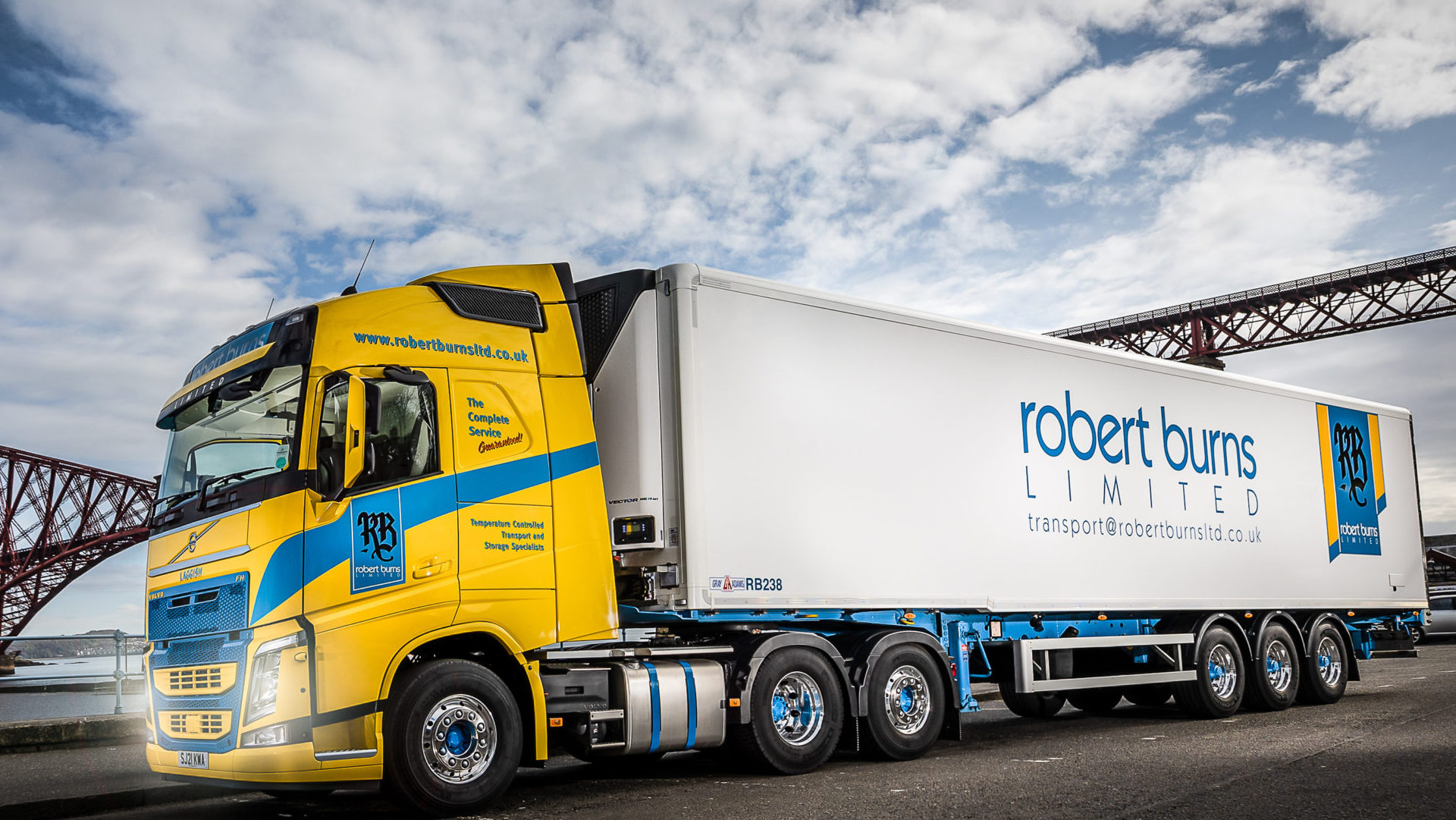 Posted at 12:40h in Case Study, News by Chelsea Tulloch

Long term Gray & Adams customer, Robert Burns Limited, based in Broxburn, West Lothian has been purchasing Gray & Adams trailers since the late 1980’s. We caught up with Robert Burns, Managing Director to talk about the long relationship between the businesses.

Robert Burns Ltd began life in 1984 with founder and MD, Robert Burns, driving one truck before expanding in the late 1980’s. In the early days, the business was involved in export meat products from British abattoirs to all over Western Europe before finally refining the business and focusing on UK wide transport. Today, Robert Burns Ltd, delivers consumer ready meat and fish products to supermarkets across the UK.

Efficiency and service level is important to Robert, and he has built his business around being able to deliver added value to his customers. The team was delighted when one of their largest customers, a popular discount supermarket, reported that they had a supplier service level on 100% on 100,000 pallets of product that they delivered last year.
The strong values of Robert, that he built his business around is one of the main reasons that they have become a long term and valued customer to Gray & Adams.

Robert tells us, “I bought my first refrigerated trailer from Gray & Adams in 1988, I can remember that the fleet number was RB100 and it was built bespoke for me. At the time, the tractor unit I had was a four-wheel tractor unit with two axels, so I needed the axels on the trailer to be brought forward in order to balance the weight when the meat product was hanging from hooks inside. It did mean there was a larger overhang in the back but I was delighted with it and it was part of my fleet for 7 years.”

“I’ve now bought around 130 trailers from Gray and Adams, some of them double deck trailers so the relationship has been a really positive one. I always think the team, especially the late Jim Gray Snr, has a fantastic “engineering head” and they are always willing to listen to their customers and accommodate specific customer requirements into the trailer.”

“I think one of the reasons that the relationship has lasted so long between the two companies is that our values are very similar. Both businesses are family run that take pride in their people. I’ve had some drivers with me for 12-15 years and I know that it’s the same with Gray and Adams. I’ve bought trailers from Fraserburgh which is how I’ve came to know Peter Gray and laterally, the Dunfermline depot through Calvin Morrice. The Dunfermline depot is where I get the majority of aftersales service and repairs for my fleet as it’s nearby. The quality of the build of the trailers is excellent, you definitely feel that it is a quality product you have just paid for! My oldest working Gray & Adams trailer is 14 years old! I have a fleet of 70 trailers at the moment and the majority are Gray & Adams built.”

With both businesses having decades of experience, over 3 for Robert Burns Transport and almost 6 for Gray and Adams, they have seen many changes over the years and as we look to the future, we are always interested to see what factors drive our customers forward and what innovations and challenges on the horizon they foresee, when discussing this with Robert Burns, he gave us some great insight.

“In terms of my customers, it will be Amazon, we already serve some Amazon smart shops in London and we believe that in a few years’ time they will be competing with the major supermarkets. In terms of industry innovation, it is electric vehicles and trailers which are going to be a big change in the way we work and some more research into how it will best serve long distance hauliers is a must for it to be adopted across the industry.

The challenges that I foresee going forward is that there will be a big skills gap for drivers within the next 5 years, we, at Robert Burns Ltd try to give as many opportunities to young people as possible, as is the case with Gray and Adams, but unfortunately we have found that Covid-19 has impacted the amount of people taking HGV training and sitting the test which will have an impact going forward.”

To find out more about Robert Burns Limited, visit, www.robertburnsltd.co.uk